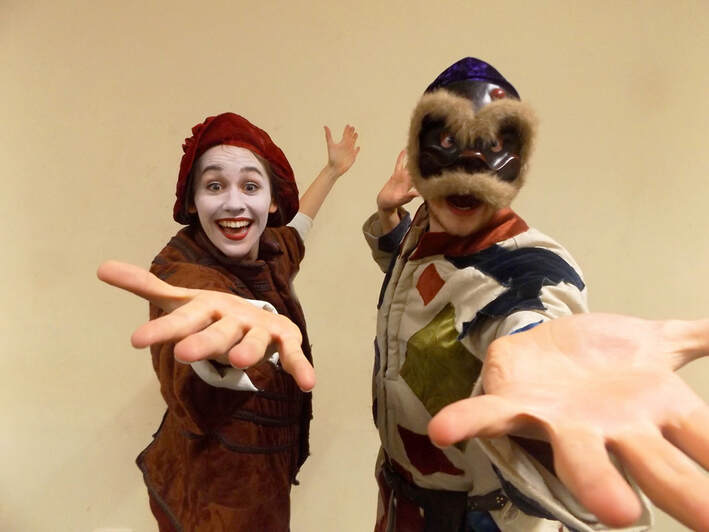 Two Towers featuring: Alice Welby as Flavio  and Cameron Essam as Harlequin.
​
Wander through the gardens of literary history and you will inevitably stumble upon an unkempt patch where it is difficult to discern the gender of who wrote what, and whether well-loved works were actually written by the man listed as the author. We know about some of the female writers who took on the guise of men to ensure their work would be received as legitimate and worthy: George Sands (Aurore Dupin), George Eliot (Mary Anne Evans), the Bell brothers (the Brontë sisters), and now…Ernesto (Flavia), the poet/poetess of Two Towers. Combining the 16th century Italian theatre of Commedia Dell’ Arte with a contemporary script written in verse, Two Towers tackles the very 21st century themes of gender identity and the female voice.
​
​

​I am in Love. Ernesto is my name.
​I am a poet - greatest of these times!
I've sent a poem to the one, the woman -
​I mean I stabbed a pen into a vein
and scratched heart-blood onto a piece of paper,
and sent it with my servant Arlecchino,
​and I am waiting for the lady's answer.


Like most poets, Flavia is cursed with an insatiable compulsion to write; she believes it is her raison d'etre and is unable to do anything else. But Flavia lives in a world where poetry is an entirely male profession; there is no place for a woman’s wit within it, and she is banished to a convent to cure her masculine affectations. Whilst en-route to the convent, the man she loves (the poet Ernesto) attempts to rescue her -- but the ship is wrecked, killing everyone on board except Flavia. Dressing herself in Ernesto's clothes, she takes his name and lives as a man, becoming the greatest poet of her time. But her male identity is compromised when she falls in love with the mysterious woman who lives in the tower opposite her own, and her passionate daily love poems, written as Ernesto, are scorned.

Commedia was scandalous in its day, for allowing women on stage. The very thought! And even today, there is still a major gender imbalance within literature and other arts. By looking at themes of gender, voice and agency, and placing them in the heightened world of Commedia, what becomes apparent is the hilarity and ridiculousness of this situation, which we are still wrestling with today.